Nicole Nau & Luis Pereyra have performed at the “Traction Edition” at Spark Nights by AUDI, Berlin. The topic of this event is a very important  matter to drivers and cars. A car has to be fast and safe at the same time. Artists and scientists of different fields showed several interesting and entertaining acts on stage demonstrating what “traction” really is about. The world-famous duo Nicole Nau & Luis Pereyra showed a beautiful and thrilling dance and also explained what “traction” means to them as dancers.

In their perfomance “Danzarín” and “La Mariposa” they performed on two different ground conditions to show its differences: “Danzarín” on a tartan floor, “La Mariposa” on a slippery ground. In fact, dancers need a special floor, which allows sliding, but also gives grip. For that reason, Nau & Pereyra go on tour with their own floor. The show has been moderated by Jörg Thadeusz, known from the German RBB television. 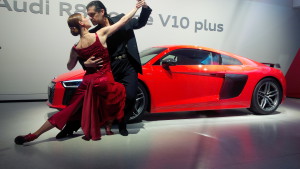 This Trailer shows you a perfect resume of the night:

Want to join the discussion?
Feel free to contribute!