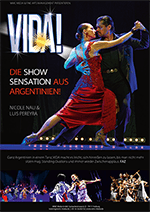 a festival of the senses. The excepcionel artists Nicole Nau & Luis Pereyra created a musical with fiery passion.

Vida! – has been to the FOLIES BERGÈRE in PARIS with outstanding STANDING OVATIONS. Now the Argentinean sensational music & dance event is back. More than ever, their new program is a tribute to the culture of their native country, it portrays tango in all its melancholy, elegance and eroticism – but also takes the audience into rural Argentina, where the vidala, zamba and chacarera are danced. The powerful beat of the large bombo drums, the rapid Argentinean tap dance in which the gauchos compete and the breakneck whirling of the boleadoras are pure rhythm, bursting with energy. Music, song and dance are brought together in celebration: of the culture of their country, of life itself. A dazzling display of virtuoso dance and thrilling live music – a festival of the senses.
“Argentina is more than Tango” – say, of all people, two of the best and most renowned tango dancers in the world, Nicole Nau & Luis Pereyra, who see themselves as empathetic cultural ambassadors of Argentina. They do bring more than a show to the stage, rather a piece of Argentinean life – in which tango has a starring role, of course. Following the successful 2013 tour with 100,000 delighted spectators in Europe and America and nightly standing ovations, they are back on tour through Europe with this new programme “Vida! Argentino”.
They dance the pain, hope, joy and power of their people. They dance the moment, they live in the moment – again and again, brimming with intensity, passion and vitality, but also its primal power, its playful lightness and joy that are too often masked by clichés.